Was Aaron Hernandez Plagued by CTE? 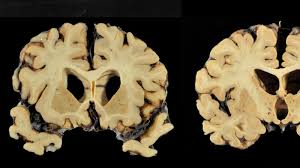 Last night I watched all three parts of The Mind of Aaron Hernandez. This mind-boggling documentary is directed by the same people who released the critically acclaimed five-part show, OJ: Made in America, and explores the mind of Aaron Hernandez, convicted murderer and former New England Patriots tight end. A lot of questions are brought up throughout this documentary that raise into question the ethics of the National Football League, among other things.

As I went to sleep a part of the series stuck in my head. SPOILER: In the first episode, a recorded phone call between Hernandez and his mother takes place in which he talks about how every time he leaves his cell, he turns around and looks at how clean and tidy it is and how it feels so great to him.

Clearly, he did not believe that. This idea of being able to downright deny reality was probably a part of how he was able to kill a bunch of people and then play in the NFL. Prior to his NFL career, scouts were asked to rate him in different categories, social maturity being one of them; Aaron earned a 1/10 in this category.

All of his actions raise one question: was he always like this, or did chronic traumatic encephelopathy (CTE) play a part? Ann McKee, the head of Boston University’s CTE Center, called Hernandez’s brain “one of the most significant contributions to our work” as well as saying “…individuals with CTE — and CTE of this severity — have difficulty with impulse control, decision-making, inhibition of impulses for aggression, emotional volatility, rage behaviors…”

What her studied showed was Herndandez’s hippocampus had shrunk. The fornix had atrophied. The frontal lobe, which is in charge of impulse control, had been “pockmarked with tau protein.” The amygdala had been severely affected. The temporal lobes showed significant damage.

Aaron Hernandez was damaged from a career of football. Among other questions, the documentary poses the question of the degree to which CTE impacted Hernandez’s later behaviors. Though the documentary cannot sufficiently answer this question, it’s a worthy starting point for anyone interest in the longterm effects of traumatic brain injury in athletes.