The Heart of Athletics: Howie Shattuck 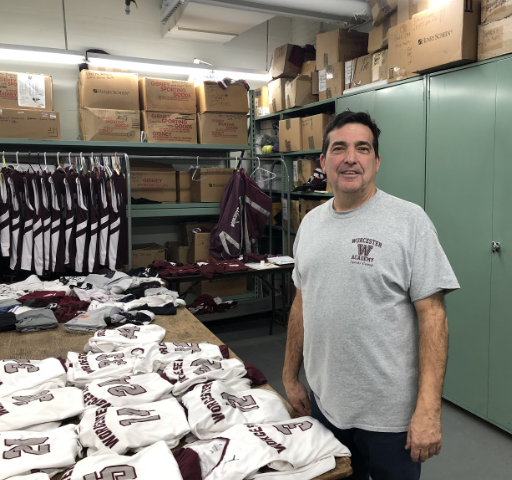 Shattuck in the WA equipment room

Howie continued his studies at the University of Massachusetts, Amherst, where he studied physical education and health.  Once out of college Howie got a part-time job working for Chet Chaisson, a staff member of the Worcester Academy equipment room. He was also working as a full-time substitute teacher for another school. When Mr. Chaisson had to take a leave, the Athletic Director at the time, Tom Blackburn, offered Howie a job. Howie has never left the job since.

A normal day for Howie can include many different responsibilities from washing and folding uniforms to putting up the volley nets in the fall season. He and his staff also help run many other facilities around campus like Gaskill Field and Morse Field.

Howie says his favorite part of the job is to be able to see the kids every day and watch them grow through athletics. He also loves the people he works with and he says he is grateful to have worked for three amazing Athletic Directors: Tom Blackburn, Pat Smith, and Ed Reilly. He says everyone he works with creates such a nice work environment.

In his free time, Howie says he enjoys spending time with his grandkids, playing golf, and of course, watching the New England Patriots. Meagan Farraher, one of Worcester Academy’s elite athletic trainers, describes Howie as having “impeccable work ethic, always being loyal to friends, quick-witted, and very family oriented.”

I myself have been able to get to know Howie a lot better through sports and helping him with things on occasion. I would describe Howie as one of the most selfless workers in our community. He always strives to do the best and he will always help you out if you need it; he is a caring individual who greatly role models the core values of Worcester Academy. Howie brings out the best in the people around him and is an invaluable member of the Worcester Academy community.

Update: a previous version of this article misspelled both Mr. Chaisson and Ms. Farraher’s names. Both have been corrected.